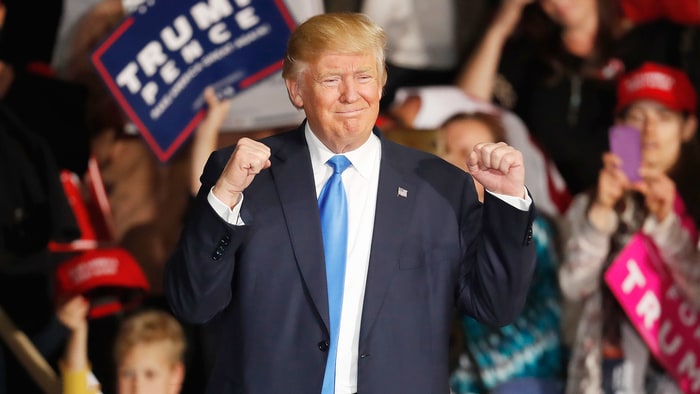 Donald Trump will be the 45th president of the United States, according to a projection by the Associated Press. The real estate developer and reality TV star locked up the 270 electoral votes necessary to win the presidency after winning Wisconsin, dashing his Democratic rival Hillary Clinton's hopes of becoming the first female president in the nation's history. Clinton called Trump to concede the election in the early hours Wednesday, CNN reported.

Clinton, who led her rival by a margin of 7 points a little over two weeks ago, saw her lead almost entirely evaporate when FBI Director James Comey reintroduced the spectre of indictment with a brief letter to Congress about new emails connected with the private email server Clinton used as secretary of state. Comey sent a second letter to Congress on Sunday re-confirming the agency's July assessment there was no case to be made against Clinton, but by that time the damage was done: her double-digit leads in several crucial states dwindled to within the margin of error.

The Clinton campaign mounted a heroic last stand, deploying high-profile surrogates to once safe blue states of Michigan and New Hampshire as well as battlegrounds Ohio, Florida, North Carolina and Pennsylvania. It wasn't enough in the end, though.

As Trump predicted, the massive crowds that turned out at to his rallies showed up in droves to the voting booths as well, stunning skeptical pundits who derided for months the campaign's seemingly non-existent ground game.

Trump had been slated to celebrate his historic upset with an uncharacteristically low-profile affair at the Midtown Hilton in New York City. Clinton, in contrast, had booked New York City's Javits Center, with its expansive glass ceiling, to celebrate the metaphorical shattering of what she frequently called "the highest, hardest glass ceiling" in the land.

eCheck is a digital version of a paper check which is faster, reliable, and secure

Virtual Merchant Accounts Are the Most Reliable Accounts

An Ultimate guide to Merchant Services

eCheck Payments Are Capable of Marking The Stronger Presence in Future

Read Amazing Ways To Let Your Bathtub Shine In All Seasons

eChecks- Why Every Business Must Choose Them Over Other Payment Methods

A Brief About eCheck Payment Gateway