Saying people have become ‘too pragmatic,’ Cardinal Tagle asks his flock, ‘Do you have time, as they say, to smell the roses?’ 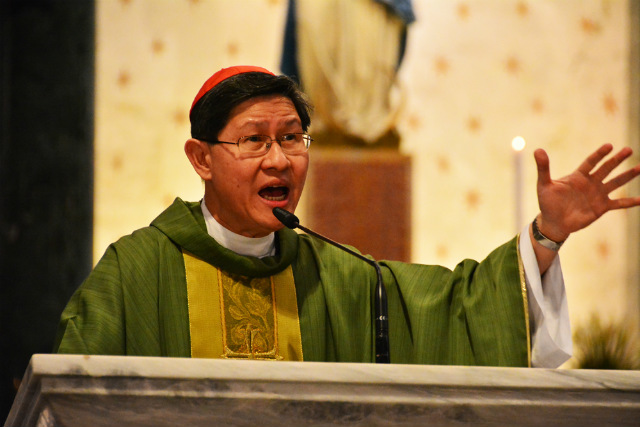 'REST, CONTEMPLATE.' Manila Archbishop Luis Antonio Cardinal Tagle urges his flock in a homily on September 1, 2015, to rest and contemplate the world's beauty. Photo by Noli Yamsuan/Archdiocese of Manila

“Part of spirituality is rest, and as we rest, we don’t only allow our body to recuperate. We allow the earth to also rest,” Tagle said on Tuesday, September 1, as the Archdiocese of Manila opened its annual Season of Creation.

The cardinal also reminded his flock to “observe the Sabbath,” the day of rest ordained by God.

Unfortunately, Tagle said, “we have made work, profit, salary our gods.”

(Now people don’t want to rest, because they need to worship their salary! The others already have a regular job and a part-time job, and still work overtime, because we seem to have made work our god.)

Like Tagle, Pope Francis stresses the value of rest – and links it with a “greater concern for nature and the poor.”

In his encyclical on the environment, Laudato Si' (Be Praised), Francis pointed out that Christian spirituality “incorporates the value of relaxation and festivity.”

Francis said: “We tend to demean contemplative rest as something unproductive and unnecessary, but this is to do away with the very thing which is most important about work: its meaning. We are called to include in our work a dimension of receptivity and gratuity, which is quite different from mere inactivity.”

“Rather, it is another way of working, which forms part of our very essence. It protects human action from becoming empty activism; it also prevents that unfettered greed and sense of isolation which make us seek personal gain to the detriment of all else,” the Pope said.

He explained that in the Book of Exodus in the Bible, work was forbidden on the seventh day “so that your ox and your donkey may have rest, and the son of your maidservant, and the stranger, may be refreshed.”

The Pope said: “Rest opens our eyes to the larger picture and gives us renewed sensitivity to the rights of others. And so the day of rest, centered on the Eucharist, sheds its light on the whole week, and motivates us to greater concern for nature and the poor.”

‘Beauty of creation lost on us’

While stressing the value of rest, Tagle also said Catholics should learn the value of “contemplation,” or seeing beauty, dignity, and worth in persons beyond what is “useful.”

“That’s why children being conceived in the womb could be aborted. That’s why children are considered as liabilities and elderly people are not cared for. They are not profitable anymore,” he said. (READ: CBCP on Pope's decision: Abortion remains wrong)

He said husbands and wives, for one, should have time to “contemplate each other.” For others, it can be as simple as “to sit down and contemplate the aroma of coffee.”

“We will miss out on a lot of those things if we are not contemplative. The beauty of creation is lost on us, and everything becomes material for our work and function. I am not saying we should not work, but I am saying that true work is accompanied by contemplation,” Tagle said. – Rappler.com

Reap The Benefits Of eCheck Payments Service For Your Business

Bathtub Reglazing To Restore Your Old Tub To Former Glory

Editorial: Be Aware At Least

The Best Payment Processing Solutions For Your Business

Payment Processing Company: Why Your Business Needs It?

The Importance & Role of Merchant Account Services For Your Business

eCommerce Payment System: What It Is and What Are Its Modes Of Payment

Ahiru no Sora (The new Slam Dunk of the present)

Things To Consider When Choosing Merchant Services For Your Business